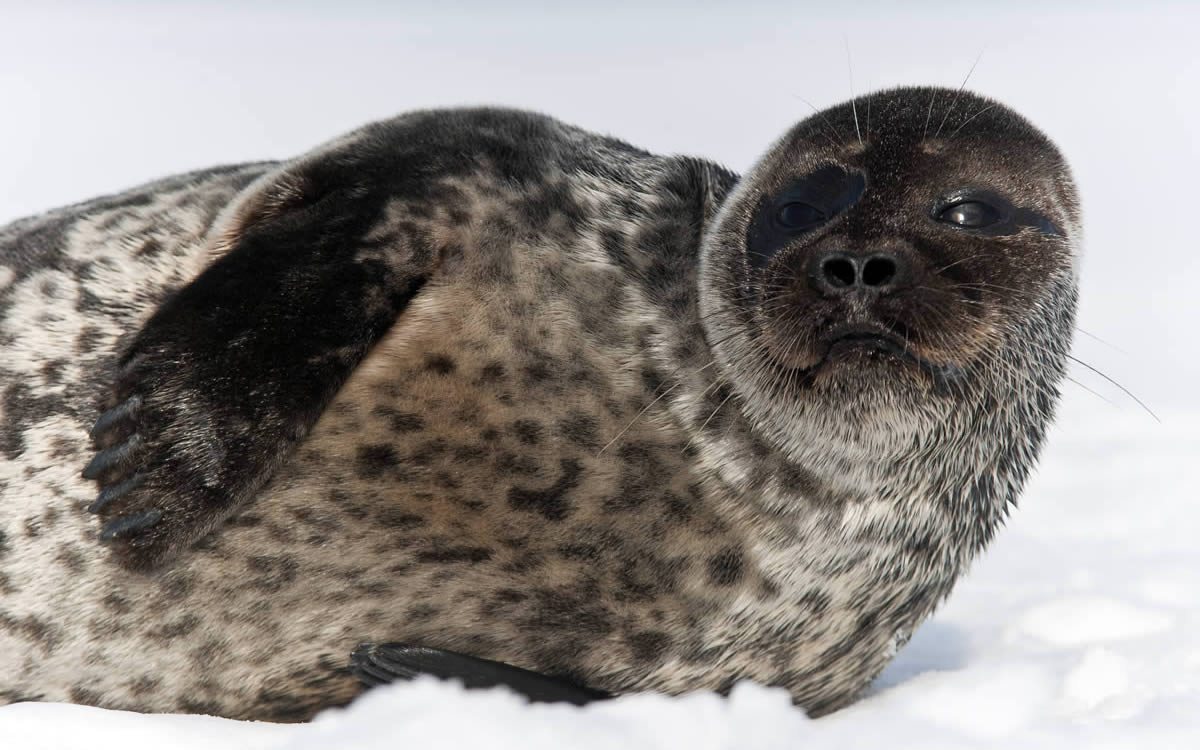 Other common names: Jar seal; the Inupiat call them natchek, the Yupik-speaking Inuit of the Bering Strait call them niknik. Other Inuit names depend on the condition of the seal: including netsiak (whitecoat), netsiavinerk (silver jar), netsilak (adult), and tiggak (breeding male).

Distinctive features: The ringed seal is named for the black spots ringed with light marks on its back. Colouration varies but the basic pattern is a grey back with black spots and a light belly.

Population: Estimated to be at least 3 million animals.

COSEWIC Status: Not at risk

Ringed seals are in all seas of the Arctic Ocean, and occur across the circumpolar region. They are non-migratory and generally associated with ice floes and pack ice. During winter, they are most abundant close to shore in the shorefast ice and have been important in the economy of the coastal Inuit. In Alaska, they inhabit the northern Bering, Chukchi and Beaufort seas. They have been found as far south as the Aleutian Islands.

Ringed seals generally occur in association with sea ice. However, some are seen during ice-free periods in the Bering and Chukchi seas. Seals appear at various coastal locations with the formation of shorefast ice in the fall and disappear in the spring with the ice breakup.

Cows give birth to a single pup in snow dens on either landfast or drifting pack ice in March and April. Those that give birth on landfast ice build lairs in pressure ridges or under snowdrifts for protection from predators and weather. Pups born on drifting pack ice are more prone to polar bear predation; some evidence suggests mothers that give birth here are inexperienced. Pups nurse for about 2 months. Weaning usually takes place at ice breakup.

Males may be territorial during the breeding season. Most cows breed again within a month after giving birth, though implantation of the embryo is delayed until mid-July or early August. Pregnancy lasts about 11 months. Most cows first give birth at 6 to 8 years. Bulls become sexually mature at the same age.

Ringed seals use their claws to excavate a cone-shaped breathing hole in the ice; this allows it to live further from the ice edge than other seals.